The Protect My Doctor and Me campaign, whose goal is to have Congress repeal the Independent Payment Advisory Board (IPAB), hosted a Capitol Hill briefing to give various patient and healthcare provider perspectives on the issue.  Healthcare Leadership Council President Mary Grealy noted that IPAB leads to immediate, blunt cuts to Medicare, and is not constructive in improving the program in the long term. 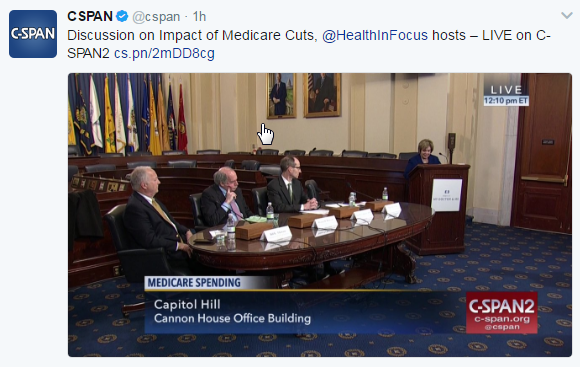 Aaron Bill, legislative director and counsel for Congressman Phil Roe, M.D. (R-TN), said the Congressman has been a leader of the IPAB repeal effort since this initially became an issue and, again this year, he is a primary cosponsor of the House legislation that would eliminate the board.  He stated that IPAB is a bipartisan issue and the cuts will affect all seniors.

Dr. Alex Valadka, president-elect of the American Association of Neurological Surgeons, chair of the department of neurosurgery at Virginia Commonwealth University and director of the American Board of Neurological Surgery, spoke from the physician’s perspective on the harmful effects of IPAB.  A lesser known problem, he said, involves the impact IPAB and its arbitrary cuts to Medicare would have on medical resident training.  Limited opportunities for residents would lower access and quality for beneficiaries.

Bob Blancato, executive director of the National Association of Nutrition and Aging Services Programs and board chairman of the American Society on Aging, said that IPAB is a dangerous power grab by an unelected board putting seniors’ care at risk.  He also criticized the lack of public input that would go into IPAB decisionmaking, saying “no one can have a town hall on IPAB.”

Dr. Bill Atkinson, who has been a hospital and healthcare CEO for over 30 years, most recently for the WakeMed system in Raleigh, pointed out that IPAB will negatively impact communities, patients, doctors and hospitals.  He commented that we all have the responsibility to lower the costs of healthcare, but IPAB is not the right way to achieve that.