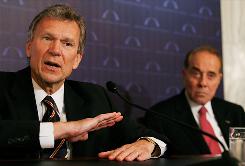 There has probably been no more vocal advocate for the idea of creating a government-run health insurance plan to compete with private plans than former Senate Majority Leader Tom Daschle.  In speeches, media interviews and in his book on how to improve America’s healthcare system, Senator Daschle has said that a government plan option should be at the core of health reform.

But yesterday, when Daschle joined other former Senate Majority Leaders Howard Baker and Bob Dole to unveil a bipartisan health reform plan under the auspices of the Bipartisan Policy Center, a national government plan option was not part of the proposal.  Instead, the former senators said that issue should be left up to the states to decide.

Senator Daschle said, “We were concerned that the ongoing health reform debate is beginning to show signs of fracture on the public plan issue, so in order to advance the process of developing bipartisan legislation, and to move it forward, it’s time to find consensus here.  We’ve come too far, and gained too much momentum for our efforts to fail over a disagreement on one single issue.”

Senator Daschle needs to be applauded for his willingness to look at the big picture.  Most of the vital provisions of health reform – insurance market reform, an individual mandate to have health coverage, subsidies for those who can’t afford insurance, payment system reform, an emphasis on care coordination, wellness and health information technology – have wide, bipartisan support.  It would be nothing less than a tragedy to lose these gains that are well within our reach because of a single-minded determination to hold onto a controversial idea like the government plan option.

We don’t have to repeat history and have health reform dashed upon the rocks of political partisanship and rigid ideology.  A big thank you to the former Senate leaders for driving that point home.

American Healthcare: The Challenge to Stay on Top