WASHINGTON – The Healthcare Leadership Council, a coalition of leading companies from all sectors of American healthcare, has launched a multimedia advertising campaign urging Congress to act expeditiously in repealing the Independent Payment Advisory Board (IPAB) before it is implemented and begins affecting access to care for Medicare beneficiaries.

The IPAB repeal ads will be running for most of June on 12 cable networks as well as the Sunday morning news shows on NBC, CBS, ABC, and Fox.  Print advertising will run in leading Capitol Hill publications and digital ads are being placed in a number of venues including Facebook and Twitter. 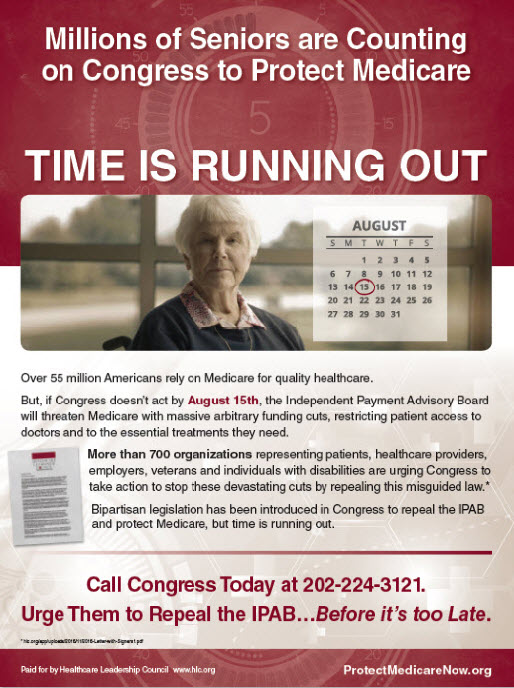 The advertising emphasizes that IPAB implementation will likely result in cuts to Medicare spending that will impair beneficiaries’ ability to see physicians and receive necessary care.  It cites the August 15 deadline which, under the law establishing IPAB, is the last day that Congress can enact a filibuster-proof resolution eliminating the board.

There have been several projections that the Medicare actuaries’ report, scheduled to be released soon, will include program spending projections that will activate IPAB for the first time, initiating a process that would lead to significant spending cuts in 2019.  Under the law, even though neither President Obama nor President Trump has nominated anyone to IPAB, the Secretary of Health and Human Services will be legally required to initiate those spending cuts.

“There is bipartisan support on Capitol Hill for repealing IPAB,” said HLC president Mary R. Grealy.  “But time is running short and we need to see that support manifest itself in votes.  Medicare already pays physicians less than private insurance.  If IPAB makes that gap even larger, it will affect the ability of seniors and beneficiaries with disabilities to see physicians.  We need to continue strengthening the value and cost-effectiveness of Medicare, but IPAB is a blunt destructive instrument and not a surgical tool.”

Improving Diversity in Our Clinical Trials for Long-term Health Equity