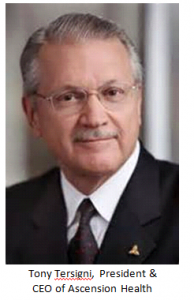 With the U.S. Supreme Court having heard arguments earlier today on King v Burwell, the case that will determine whether the federal government can continue to provide health insurance subsidies to consumers who purchase coverage from the federally-administered exchange, I thought it would be particularly useful to spotlight the perspective on this issue of one of the nation’s leading healthcare providers.

Anthony Tersigni is President and CEO of Ascension Health, the nation’s largest Catholic and non-profit healthcare system.  (He is also a Healthcare Leadership Council member and former chairman.)  He authored an op-ed for The Hill, a Capitol Hill newspaper, making the point that an adverse ruling by the Court would be “effectively denying millions of people and their families – those already most vulnerable – a basic human need.”

It is my hope that lawmakers will pay close attention to Mr. Tersigni’s words and be prepared to act to help these individuals and families keep their health coverage in place if the Supreme Court rules against the Obama Administration on this issue.  His op-ed follows:

How do you tell 6.5 million people that they no longer have health insurance, some of whom just received coverage for the very first time? How do you take away affordable healthcare, especially from someone on an already limited income?

That’s the real dilemma before the U.S. Supreme Court. The case of King v. Burwell challenges the legality of tax subsidies for federally operated state exchanges. I am not a lawyer, so I will leave the detailed legal arguments for others. It is safe to say, however, that the legal argument for eliminating the subsidies rests on taking four words of a thousand page law out of context — “established by the State” — and in the process violating the intent of Congress.

As head of the nation’s largest Catholic and nonprofit healthcare system, I can attest firsthand that eliminating these critical tax subsidies will have a devastating effect on the millions of Americans who now rely on the Affordable Care Act to receive much needed access to healthcare. With subsidies available on all exchanges, more people than ever are receiving the care they need and fewer are struggling to pay for it.

I see the Affordable Care Act beginning to accomplish its goal of extending affordable coverage to the uninsured as well as making coverage more secure for those who have insurance. Before the ACA, one new uninsured person was treated every 37 seconds at an Ascension hospital location. The national uninsured rate is now down to 12.9 percent, with the greatest drop among low income Americans.

While the ACA is not perfect, it is a positive step toward a national healthcare policy — not just a healthcare financing policy that we have attempted in the past. In fact, Medicare was not perfect when it was enacted — we have made a number of major changes, and today surveys have found that seniors on Medicare are overall satisfied with their plan.

The Affordable Care Act is a good thing for society. For Ascension, that is the Mission that we are called to serve — caring for all persons with special attention to those who are poor and vulnerable. Hospitals across the Ascension health system are providing for an increasing number of patients who previously might not have come to us for care because they did not have insurance coverage.

In the 37 states that elected to have the federal government manage their exchanges, nearly 70 percent of those who have private insurance coverage through the exchanges could lose it — we’re talking about millions of people. Even those remaining in the federally operated state exchanges could see their policy costs increase by 35 percent.  To take away insurance coverage and access to healthcare would be devastating, effectively denying millions of people and their families — those already most vulnerable — a basic human need.  Neither the law’s language nor its purpose requires this outcome.

At Ascension, we proudly serve our mission in the spirit of our founders and sponsors who selflessly cared for vulnerable people in need for centuries. As applied to our society, that vision of charitable care and social justice requires that everyone have sufficient health insurance coverage — because such coverage provides access to some of the essential basic goods necessary for living a fully human life.

As they reflect on their decision in this case, the court should look at the entire law — and the intent of Congress — instead of taking four words out of context. The court should reflect on the devastating impact that eliminating the subsidies would have on millions of Americans who are just beginning to enjoy access to healthcare, essentially stripping them of their dignity.  Giving everyone access to our healthcare system is in the best interest of creating a more compassionate and just American society.